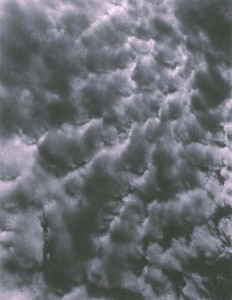 From 1922 to around 1935 Alfred Stieglitz took a series of photographs of clouds that he named Equivalents. The photographs were not intended as literal series of meteorological studies but as an examination of states of mind. (1)

By photographing clouds, Stieglitz meant to demonstrate how “to hold a moment, how to record something so completely, that all who see [the picture of it] will relive an equivalent of what has been expressed.”

Stieglitz’s choice of intangible vapors as his ostensible subject was telling, for the vagueness of transcendental meaning is not easily sustained by material objects. Whether his equivalents achieved their goal is a question each viewer must answer for himself or herself; that they demonstrated the ineffable dimension of inspiration is without doubt. (2)

Dorothy Norman once recorded a conversation between Alfred Stieglitz and a man looking at one of his Equivalents prints:

Man (looking at a Stieglitz Equivalent): Is this a photograph of water?

Stieglitz: What difference does it make of what it is a photograph?

Man: But is it a photograph of water?

Stieglitz: I tell you it does not matter.

Man: Well, then, is it a picture of the sky?

Stieglitz: It happens to be a picture of the sky. But I cannot understand why that is of any importantance. (3)

With the theory of Equivalence, photographers everywhere are given a way of learning to use the camera in relation to the mind, heart, viscera and spirit of human beings. –Minor White

White was greatly influenced by Stieglitz’s concept of “equivalence,” which White interpreted as allowing photographs to represent more than their subject matter. He wrote “when a photograph functions as an Equivalent, the photograph is at once a record of something in front of the camera and simultaneously a spontaneous symbol. (“A ‘spontaneous symbol’ is one which develops automatically to fill the need of the moment.   A photograph of the bark of a tree, for example, may suddenly touch off a corresponding feeling of roughness of character within an individual.”)

In his later life he often made photographs of rocks, surf, wood and other natural objects that were isolated from their context, so that they became abstract forms. He intended these to be interpreted by the viewer as something more than what they actually present. According to White, “When a photographer presents us with what to him is an Equivalent, he is telling us in effect, ‘I had a feeling about something and here is my metaphor of that feeling.’…What really happened is that he recognized an object or series of forms that, when photographed, would yield an image with specific suggestive powers that can direct the viewer into a specific and known feeling, state, or place within himself.(4)

“Manifestations of the Spirit” by Paul Martineau